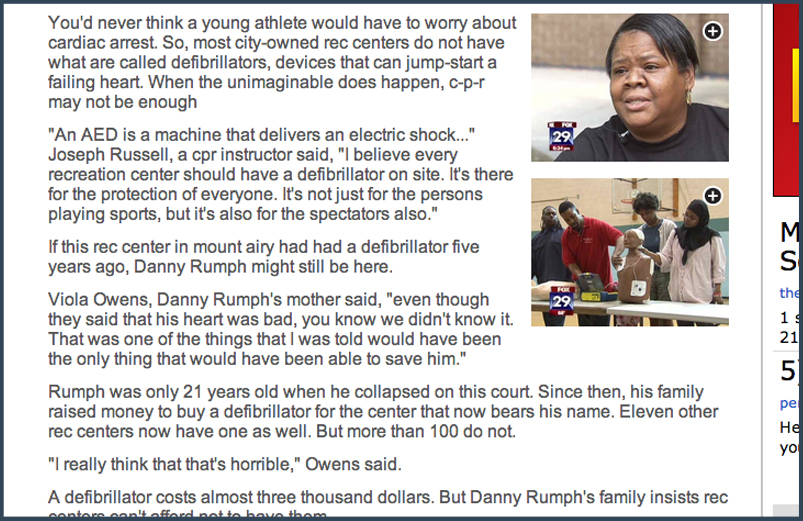 You’d never think a young athlete would have to worry about cardiac arrest.

So, most city-owned rec centers do not have what are called defibrillators, devices that can jump-start a failing heart. When the unimaginable does happen, c-p-r may not be enough

“An AED is a machine that delivers an electric shock…” Joseph Russell, a cpr instructor said, “I believe every recreation center should have a defibrillator on site. It’s there for the protection of everyone. It’s not just for the persons playing sports, but it’s also for the spectators also.”

If this rec center in mount airy had had a defibrillator five years ago, Danny Rumph might still be here.

Viola Owens, Danny Rumph’s mother said, “even though they said that his heart was bad, you know we didn’t know it. That was one of the things that I was told would have been the only thing that would have been able to save him.”

Rumph was only 21 years old when he collapsed on this court. Since then, his family raised money to buy a defibrillator for the center that now bears his name. Eleven other rec centers now have one as well. But more than 100 do not.

A defibrillator costs almost three thousand dollars. But Danny Rumph’s family insists rec centers can’t afford not to have them.

“Learn the lesson from what happened to my son. They take for granted because these children are young that it can’t happen to them, Owens said. And my son was healthy, had a physical every year…played sports.”

Marcus Owens, president of the Daniel E. Rumph II Foundation said, “I would love to see a law passed that would mandate these machines to be in all recreational facilities. Not just recreation centers, boys and girls clubs, PAL centers, YMCAs, everywhere recreation is going on.”

“I think we need to make this a priority. And we need to talk to our leaders, and they need to understand how important that this is,” Russell said.

Danny’s family is still trying to raise money. So far the Phillies have made a contribution but none of the other city’s sports teams have. So at this point the vast majority of recreation centers in the city do not have defibrillators, which means what happened to Danny Rumph could still happen again.